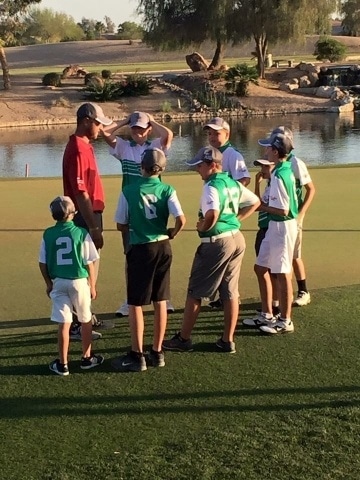 Colorado native Riley Andrews started the year-round Elite Golf School three years ago to help young golfers reach their goals and see the possibilities with the sport. A strong believer in setting goals, Andrews helps students through creation of “success plans,” to target their work during each lesson.

“We do this by providing each student with the systems needed to lower scores and create the mindset of a champion with the ultimate goal of playing golf at the collegiate level and beyond,” Andrews said.

Anawin’s dad, Paul, said his son started playing at 8 years old by just hitting balls on the course with him.

“Then he started playing three to four holes and after four or five months we stayed playing US Kids. He won the trophy,” Paul Pikulthong. “I said if he wanted to keep playing, we needed to find a coach. I wanted him to have someone who was young. He’s an only child. … After that we talked to Riley. It’s the full package. He likes it. His friends are all here.”

Dan Beyer brought his son, Bryan, to Elite when the program started. Now is daughter, Brooke, a high school freshman, has picked up the sport.

“She was doing this swinging with the club, just messing around with the coaches. They said she had a natural swing. She asked, ‘Can I try it and if I don’t like it leave? Can I quit?’ She absolutely loves it,” Dan said. “She wants to go to Stanford and I said that’s the only way she can go.”

She may be headed that direction. She’s finished in the top five during three spring tournaments. Andrews’ support of his students goes beyond the golf course. He’s attended music concerts and graduations.

“As a parent you want the best for your children and you work to guide your child to be respectful, considerate, set achievable goals and encounter great morals and life values. Elite Golf Schools’ program is just that. It’s not only a program to teach great golf skills, but also life skills,” Dan Beyer said.